Practicing yoga while on your period is still a controversial issue in the yoga world. Many practitioners believe that practicing yoga should be minimized. The poses practiced should be selected carefully during this time. Others feel that it is time to just rest. Menstruation is, of course, not a reason to avoid practicing yoga. But many women prefer to rest during those days of the month and spend time looking within. Each woman should decide which practice is appropriate for her body. It is important to listen to your body during this time. Each woman looks at menstruation and the need for her body and soul differently.

On the other hand, practicing yoga can have a positive effect on hormonal, mental, and physical health during this time. Despite the fact that there are some asanas that should be avoided during the menstruation period. There are also many beneficial asanas that help reduce its unwelcome effects. 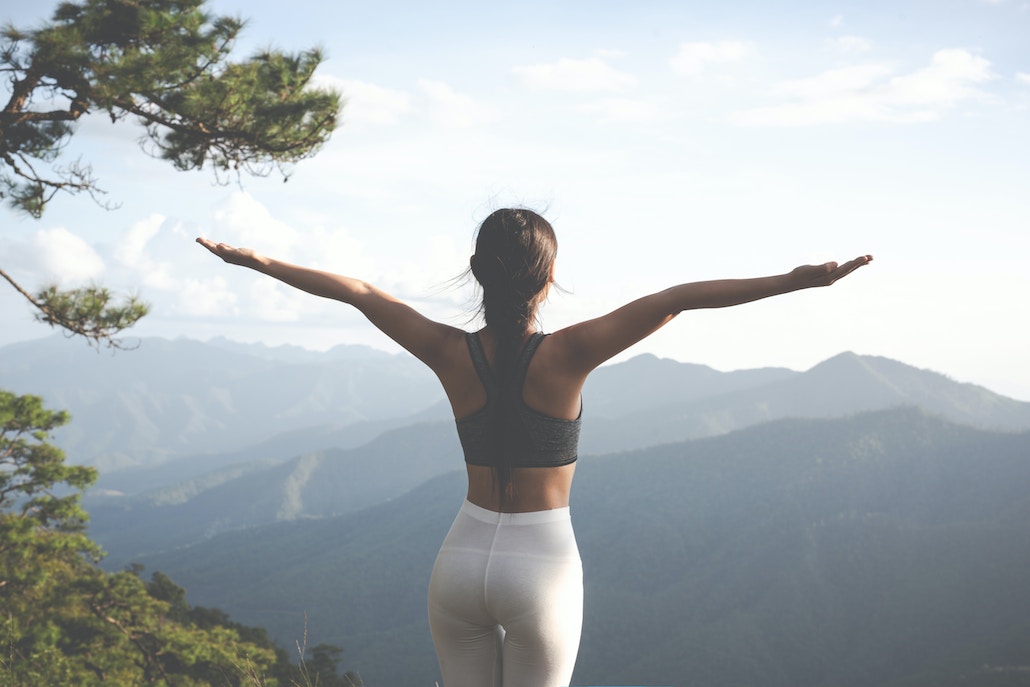 Benefits of Yoga during Menstruation

The menstrual cycle of a woman can vary depending on the weather conditions, her diet, her stress level, and other factors. Women can become more sensitive, increasing their level of awareness…

Mood swings due to hormonal changes may be an unfortunate side effect. Practicing yoga can help to minimize these hormonal imbalances. Meditation and breathing or yoga nidra are good choices for those who prefer to rest during this time. The yin poses of yoga, which can be described as gentle poses, can be practiced longer. This type of practice helps women to become more grounded and tap into their inner strength.

Practicing yoga may also improve the quality of sleep by prolonging a deep sleep state, which helps women allocate some time for themselves.  Yoga nidra, or yogic sleep, may also be practiced by women who prefer to take things easy during her period.

It is believed in yoga that energy flows to a chosen point by focusing the attention on a specific area of the body (dharana).  Sending deep breaths to a cramping area may relieve specific pains. Using this concentrated breathing during practicing yoga poses could also minimize the cramps in the abdominal area.

Yoga Poses to Practice during Menstruation

If you decide to practice yoga while menstruating, you should be sure to listen carefully to your body’s cues. The following poses can help you reduce the side effects of menstruation.

Practicing gentle forward bend asanas ensures that the blood flows towards the uterus by gently increasing intra-abdominal pressure. This creates a massage effect on the abdominal and pelvic areas and eliminates cramping and heavy bleeding. Combining the poses with concentrated breathing can help to calm the mind. 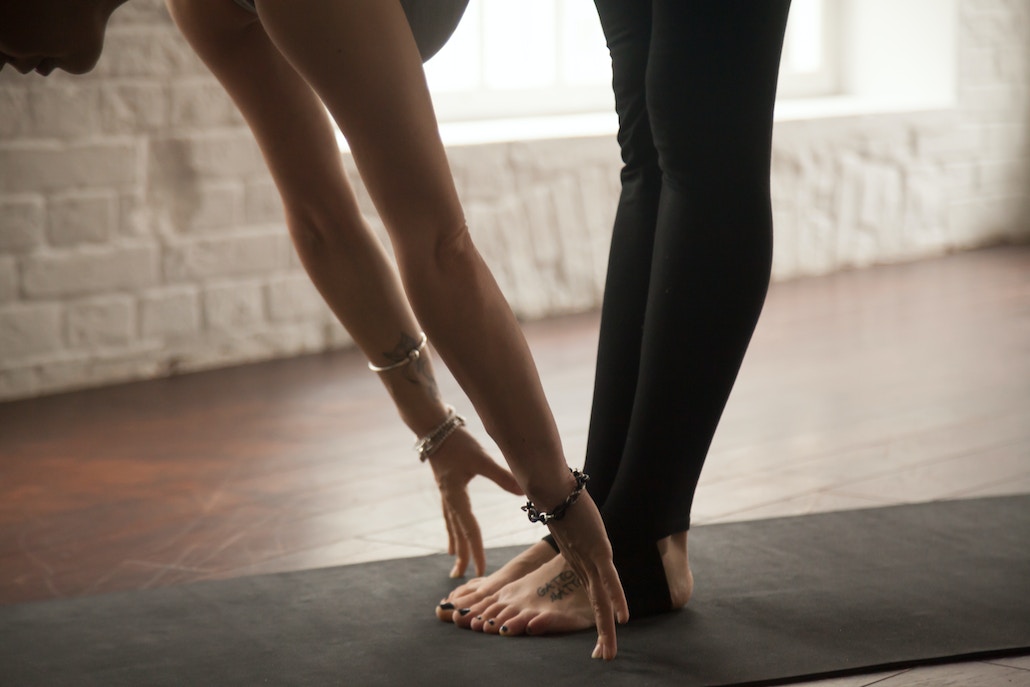 The following three forward fold poses can be practiced during menstruation with the support of cushions or a bolster. Be sure to fold forward gently while doing yoga during your period and do not force yourself…

Here are some basic forward fold poses that you can try:

Gentle twisting asanas with an accurate exhalation can help your lower back pain, cramping, and congestion. It is important to take a deep breath before getting into position and twist when you exhale. However, some of the specific twistings pose in yoga can be overstimulating for your pelvic and abdominal areas so it is recommended that they are practiced with caution during menstruation… 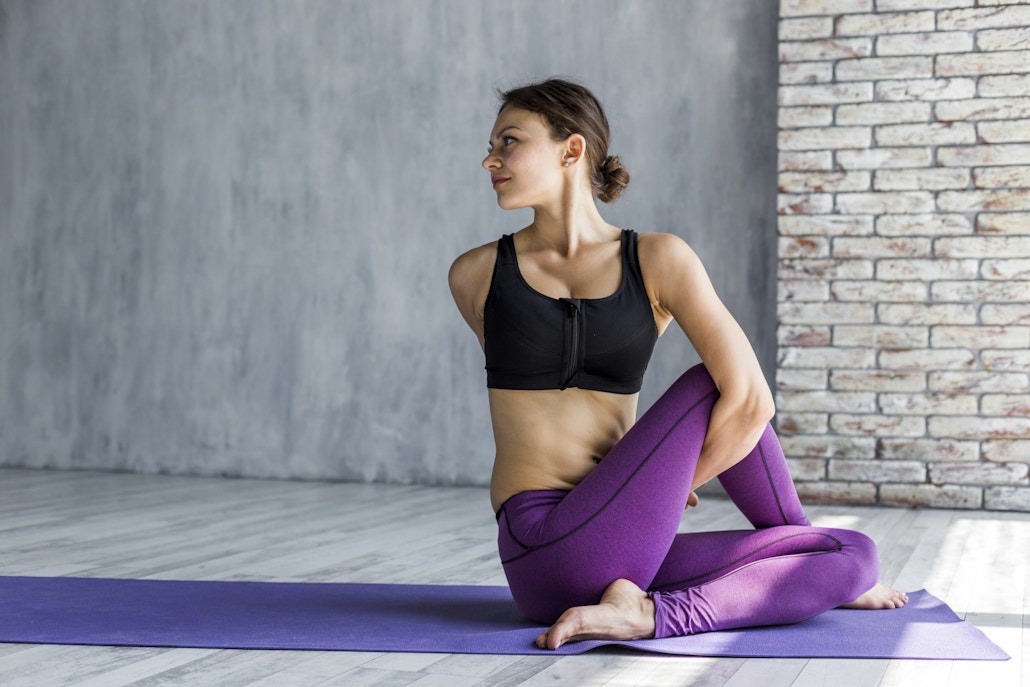 Practicing the following twisting yoga poses gently can massage the pelvic area and minimize lower back pain. Remember to use blankets or a bolster under your knees, and don’t forget to breathe.

Supported gentle backbends could also be very efficient in reducing menstrual pain and pelvic discomfort. Backbend poses to open the front of the body and allow the breath to reach the pelvic area more comfortably. Strong backbends should not be practiced as they may cause undue pressure to the pelvic ligaments. 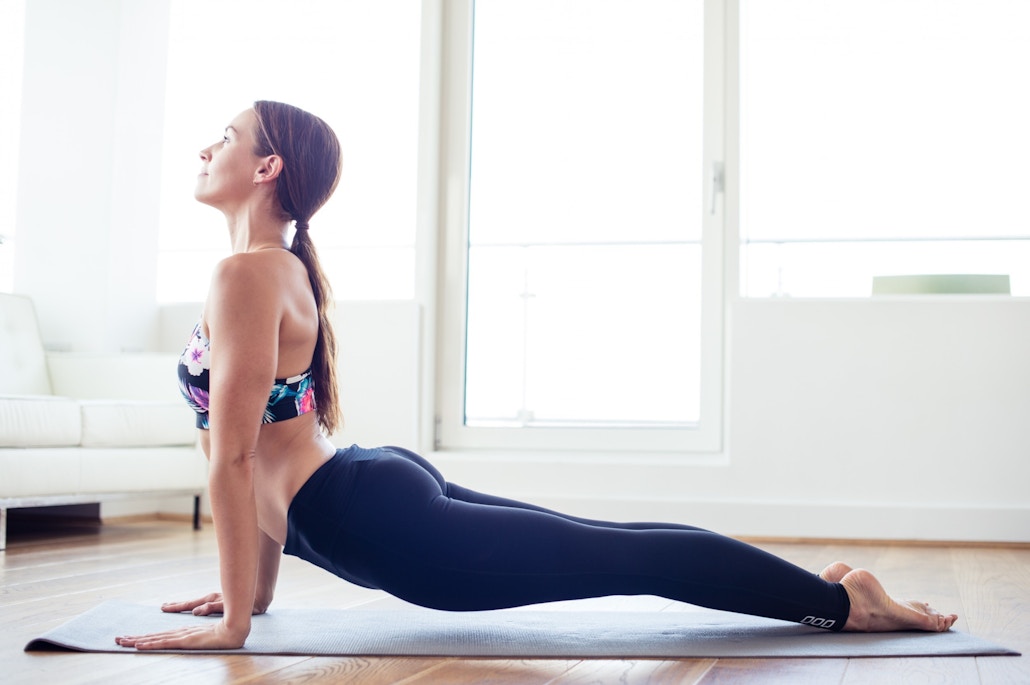 Yoga Poses to Avoid during Menstruation

Some yoga poses are described as ‘contraindicated,’ which means that they are inadvisable for the practitioners. The more known yoga schools forbid some of the yoga poses during menstruation and encourage women to take a break during that time of the month.

In the yoga world, the reason why inversions are inadvisable during a woman’s period is that the energy flows downward in the body at this time. This energy, called apana-vayu, naturally helps to move the urine and blood safely out of our bodies. Therefore, practicing inversions may negatively affect this energy flow. 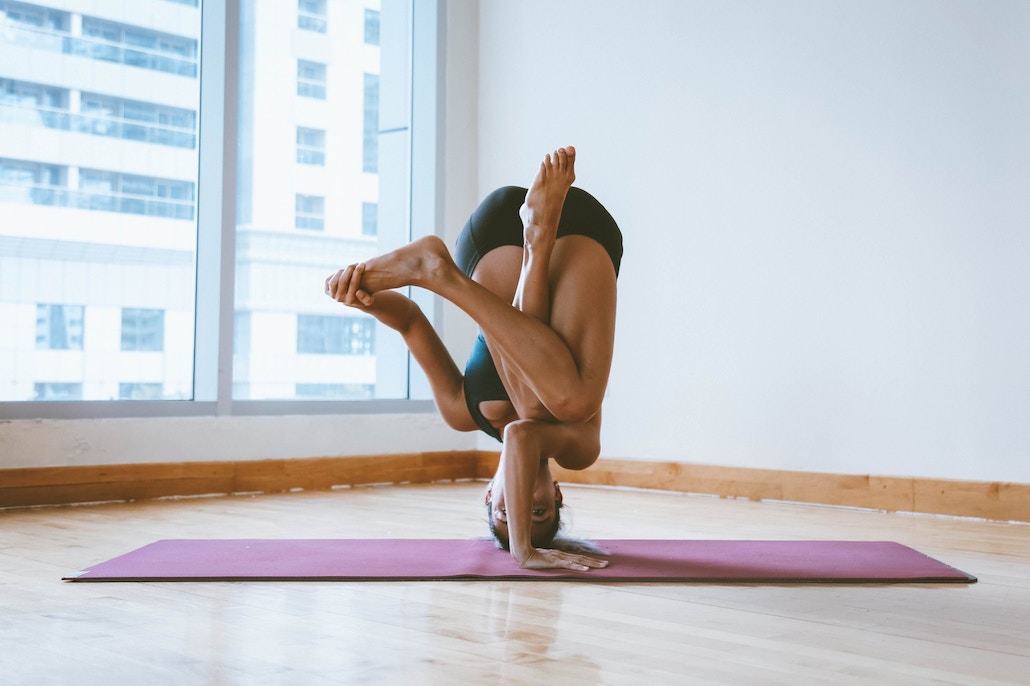 Furthermore, you should not be practice deep backbends because they may create undue pressure and stress on the pelvic area. You should also avoid deep twisting for the same reason. Practicing these types of deep poses may cause an increase in contractions if there is still pain and spasms in the pelvic area.

Here are some yoga poses you should avoid while menstruating:

There are many asanas to choose from when practicing yoga during your period and some to avoid. But you should choose for yourself the ones that are most comfortable for you during this time. You know your body best., Remember these useful tips to help you listen to your body and follow your feelings while practicing yoga.

Related: What You Should Eat While on Your Period